I spent the past few weeks researching the story of U.S. citizen children caught in the foster care system after their immigrant parents are detained or deported. We focused on the story of one father whose parental rights to care for his three sons could be terminated – not because of abuse or neglect, but simply due to his immigration problems. Read the story here

The case of Felipe Montes and his kids is just one of dozens of cases making their way through the court system nationwide.

At the end of February, a retrial began in the case of Encarnacion Bail Romero, a Guatemalan mother whose parental rights were terminated after she was caught in an immigration raid at a poultry plant. Last year, the Missouri Supreme Court ruled that state adoption laws were not followed when Bail Romero’s then 1-year-old son was adopted in 2008 by an American couple while she was incarcerated for immigration violations. The couple changed the boy’s name from Carlos to Jamison.

And the Arizona State Court of Appeals will soon consider the case of Amelia Reyes Jimenez, a Mexican mother of four who was detained in 2008 and stripped of her parental rights this winter after a judged ruled that she had failed to make progress towards reunification with her kids while in immigration detention. Reyes Jimenez has since been deported to Mexico and has had very limited contact with her children, who were 3 months old, 7, 9 and 14 years old when Reyes Jimenez was first detained. The children, who are in two separate foster homes and slated for adoption, now need an interpreter to speak with her, the mother’s lawyer Nina Rabin told me.

And these cases are not new. In 2004, the Nebraska Supreme Court ruled that the state acted improperly when it terminated a Guatemalan woman’s rights to her two American-born children after she was detained on charges of falsely identifying herself to a police officer and then deported. The court ruled that the state made no effort to reunify the family, largely because social service workers “thought the children would be better off staying in the United States.” Eight months after the ruling, nearly four years after the children were taken from Mercedes Santiago-Felipe, the mother was finally reunited with her kids. 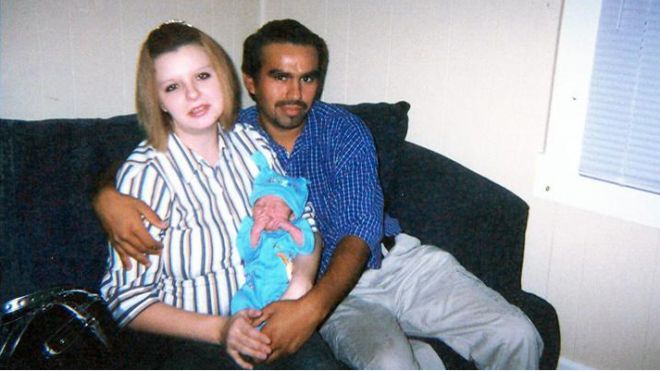 This undated photo shows Felipe Montes and his wife, Marie Montes, and one of their three boys. The children were placed in foster care after Felipe Montes was deported back to Mexico in late 2010. (AP Photo/courtesy of Felipe Montes via the Applied Research Center)