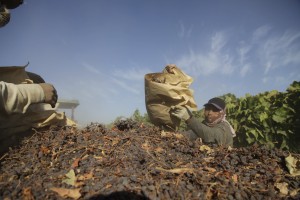 In this photo taken on Tuesday, September 24, 2013 near Fresno, Calif., farmworkers pick paper trays of dried raisins off the ground and heap them onto a trailer in the final step of raisin harvest. This year, due to a labor shortage in California and other western states, many growers increased farmworker wages by up to 20 percent pay and gave other incentives, making this one of the best harvests for the workers. (AP, Gosia Wozniacka)