Many details proved surprising and chilling about the mass shooting at the Fresno chicken processing plant this week. There was the way that the shooter, an employee at the plant, shot his victims execution-style, by placing the handgun against their head or neck and pulling the trigger. There was the fact that the victims, while deboning or grinding mounds of chicken pieces, couldn’t hear the shooter approaching, because they wore earplugs and clanging machinery drowned out any other noise. Police said the shooter carefully chose his victims — he walked around others, sparing their lives, to reach his intended targets. And yet, most of the victims had worked at the plant only a week, or a few months.

Violence and cold calculation are expected from a killer. And we tend to quickly dehumanize the shooter. We at the AP reminded readers in the first sentence of the story that he was an ex-convict, with plenty of prison time to his name. All newspapers and TV stations honed in on this. As if we were hoping that by negating the killer’s humanity, the very fact that he’s human, we would be putting some distance between ‘us’ and ‘him.’ Because we can’t possibly be like him, or have any alliegance or familiarity with this killer. Except that it’s not that easy. One of the men that Lawrence Nathaniel Jones shot execution style was also an ex-convict, another had a violent past in gangs. A violent or difficult past doesn’t lead everyone to kill. What happened in Jones’ mind, then, to lead him to go on a rampage? Who was Jones, really?

One small detail I happened on by coincidence in the course of reporting proved to be most surprising in this story, at least for me. Because Jones had a criminal record and several of his convictions were in Fresno County, I drove to the Fresno county courthouse archive, a small non-descript building on a lightly travelled side street. Armed with case numbers, I requested Jones’ two files. The files contained a series of court papers, most of them filled with boxes to check, lacking any narrative detail. But there was also something else: several letters written by Jones to the judge. In the letters, Jones mostly complained that his court appointed counsel was not attentive enough and that the lawyers kept dropping his case. But the content was secondary. What struck me with force was Jones’ handwriting: elegant cursive, slightly slanted to the right, letters perfectly shaped, ink delicately, neatly set on the page. In addition to handsome penmanship, Jones was also eloquent and had an excellent grasp of structure, orthography and grammar (except for a few minor spelling errors). As a reporter, I’ve received over the years a good share of letters from prisoners. Most exhibit sloppy writing, frequent and serious spelling mistakes, run-on sentences and other writing errors. Not Jones’ letters.

A student of language and writing, I ask myself: how could a man who in cold blood killed his co-workers at close range, how could this man have beautiful handwriting, and use language eloquently? I continue to regularly hand write letters to my friends and family – perhaps this is why the shooter’s letters were especially intriguing to me and made me wonder about his person. This is not to defend him. I believe there have been some studies of serial murderers’ handwriting, and the fact is that people who have been known to kill sometimes also proved very gifted and intelligent.

Still, I wonder: what traces can you glimpse through a person’s handwriting, that disappearing art? A sensibility?  Vulnerability? Hope? And this brings me back to ask: who was Jones and what made him snap?

A sample of Jones’ letter below. Links to my AP stories on the shooting: here and here 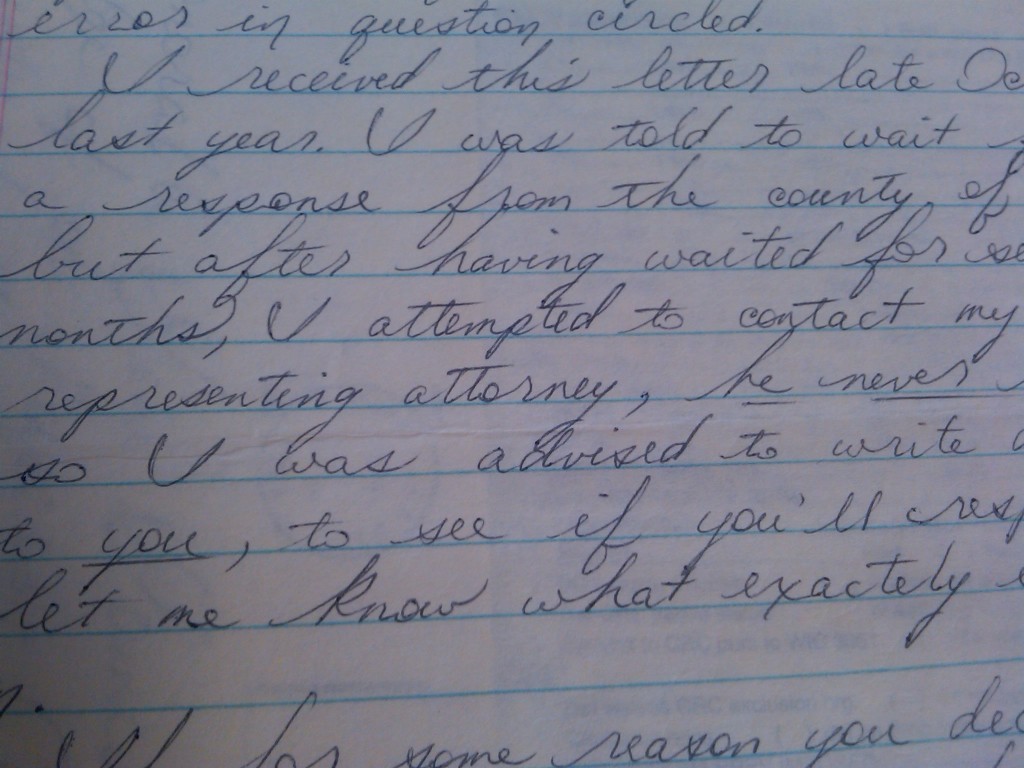